AlphaBay was an darknet market which operated on an onion service of the Tor network. It was shut down after a law enforcement action as a part of Operation Bayonet against it (and also the Hansa market) in the United States, Canada, and Thailand, reported 13 July 2017.

In October 2015, it was recognized as the largest online darknet market. Next to dealing drugs (also Fentanyl), users could get all sorts of other things like malware, hacking services, weapons, accounts or even luxury goods.

At the time of the shut down, AlphaBay had

Operation Bayonet was a multinational law enforcement operation culminating in 2017 targeting the AlphaBay and Hansa markets. The following information was found during the operation.

At a cybersecurity conference in Manhattan, an FBI agent involved in the case showed a video of Cazes’s arrest to journalists and law enforcement, and joked about how the arrest went down.

“See if you can spot the moment when he realizes he’s about to be arrested,” FBI special agent Nicholas Phirippidis said as he played a few seconds of the surveillance footage of the arrest at Fordham University’s International Conference on Cyber Security; the audience laughed as the video played.

The FBI’s plan was to crash the undercover police car onto Cazes’ front gate and get him to come out. This wasn’t just to get their hands on him, but also to get his computer before he managed to encrypt his data.

The idea was to get Cazes’ computer unlocked and unencrypted to avoid having to potentially crack into it by breaking its encryption. Increasingly, police and federal agents try to seize computers while they are on and unlocked to avoid the Apple vs, FBI scenario, where feds initially couldn’t access data on an encrypted iPhone.

Unfortunately, AlphaBay admin Alexandre Cazes did not want to serve years behind jail, so he took his own life in a Bangkok jail.

This was the cell where Alexandre Cazes was found dead. The content below is graphic. 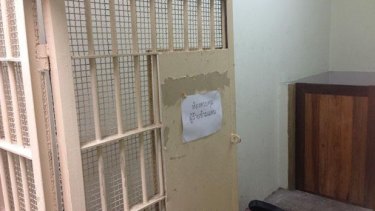 Importance & Use Cases of a VPN